Recently moved from its old location in the city hall to the Arsenale, the impressive vaulted stone halls where Amalfi's ships were once built, the Museo della Bussola e del Ducato Marinaro di Amalfi ("Musuem of the Compass and of the Marritime Dukedome of Amalfi") is dedicated to the city's rich seafaring history.

Pride of place is occupied by the Codice Foscariniano, a 17th century compendium of nautical rules and history that contains one of the earliest examples of the Tabula de Amalpha—or Tavole Amalfitane. These 66 chapters of bylaws and rules, drawn up in Amalfi between the 11th and 14th centuries, represent the world's very first international maritime code, which contineud to act as the common law of the High Seas until 1570.

Among the historical oddments are various antique nautical instruments, some passable paintings by local artists, and traditional costumes for the Regata Storica delle Quattro Antiche Reppubliche Marinare, the hisotrical boat race between Amalfi, Venice, Pisa, and Genova. The race itself takes place the first week in June, rotating between those four host cities (Amalfi will have it next in 2020, 2024, 2028, etc.).

Interestingly, for a while in the 10th to 14th centuries, Amalfi minted its own money from the Ducal papalce. A few of these tarì are on display (appropriately enough, looking a bit like embossed sea shells). They were officialy worth 1/4 a dinar, or a Byzantine coin, and were made of 12 carat gold. For a sense of value, in the 11th century a pergola of vines outside Ravello cost 15 tarì, a three-story seasisde house in Amalfi cost 3,000 tarì, and a comerical sailing ship was valued at 4,000 tarì.

And then there's all the fuss about the compass. Amalfi desperately wishes that its favorite son, Flavio Gioia, invented the compass in the early 1300s. Sorry, Amalfi. No dice. At best, Amalfitani mariners were merely among the earliest European adopters of this well-documented, thoroughly Arab navigational innovation.

Amalfi and Atrani Private Walking Tour
3h | from €20
Book it

Let yourself be enchanted by a three-hour guided tour starting from the historic center of Amalfi to Atrani, experiencing the colors, the typical tastes and the millenary history of the Amalfi coast.

Amalfi was the capital of an ancient maritime republic. Its historic center is considered an outdoor museum and preserves, almost intact, architectural and urban elements, heritage of its glorious past. Do not miss the visit to the famous Cathedral dedicated to SantAndrea in Romanesque-Baroque style which witness the important commercial role played by Amalfi during the medieval period.

From the center of Amalfi you will walk up the stairs to get to the so-called Piazzetta, right in the heart of Atrani, from where you can admire a beautiful panorama. 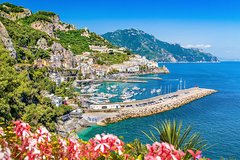 Private Tour of the Amalfi Coast: Positano, Amalfi and Ravello
7h | from €319
Book it
Join us and spend the day exploring the little coastal towns that form the world-renowned Amalfi Drive also enumerated in UNESCO World Heritage Sites by Private Car.

This storied church features a Byzantine icon of the Virgin Mary & was once part of a monastery.

The charm of history, on which the whole contemporary world has been walking since the 60s of the last century. Right in the center of our city, the Roman Villa stands today as a testimony of past wonders and as they fly for a new image of Positano, which is affirmed, above all, as a melting pot of art and culture.

With its glamorous, celebrity-packed beaches, breathtakingly gorgeous seascapes, and boutique-filled historic center, its easy to see why Positano is the most sought after destination on the Amalfi Coast.

Quaint museum featuring exhibits on the history & production of paper in Amalfi, plus a gift shop.

Villa Rufolo is a building within the historic center of Ravello, a town in the province of Salerno, southern Italy, which overlooks the front of the cathedral square. The initial layout dates from the 13th century, with extensive remodeling in the 19th century.

The Grotta dello Smeraldo is a cave, partly inundated by the sea and located in Conca dei Marini, Italy, on the Amalfi Coast.

Villa Cimbrone is a historic building in Ravello, on the Amalfi coast of southern Italy. Dating from at least the 11th century AD, it is famous for its scenic belvedere, the Terrazzo dell'lnfinito (the Terrace of Infinity).
Much altered and extended in the early twentieth century by Ernest William Beckett (later Lord Grimthorpe), the villa is today composed of many salvaged architectural elements from other parts of Italy and elsewhere; little of the original structure remains visible.

How long does the museum take?

It really only takes about 20 minutes, though to peruse everything and read all the placards you might stay 45 minutes.

Tours from our partners

Stuff your eyes with wonder

"Stuff your eyes with wonder, live as if you’d drop dead in ten seconds. See the world. It’s more fantastic than any dream made or paid for in factories.”
— Ray Bradbury