Sorry. Nothing fits that criteria.

The most important painting gallery in all of Southern Italy

Rome's Palazzo Barberini serves as half of the Galleria Nazionale d'Arte Antica, a collection of Old Masters from Raphael to Caravaggio 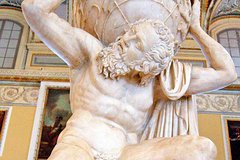 Naples Shore Excursion from Port to Top City Museums with Skip-the-Line Tickets
8h | from €146
Book it
The tour provide the pick up at the port of Naples and will include a visit to three of the most beautiful Neapolitan museums with the company of a professional guide.
The first stop is the Royal Palace of Naples: wanted by the royals in the seventeenth century it houses inside the collection of paintings commissioned by the sovereign themselves over the course of time.
Second stop is the National Archaeological Museum. A private car will pick you up in Piazza Plebiscito to take you to the Museum. Here you can admire the rich collection of marble, the Egyptian collection and the one from Pompeii and Herculaneum.
Finally, after a break of an hour and a half, your driver will take you to the Capodimonte Museum where you can immerse yourself in the beauty of the paintings by Tiziano, Caravaggio, El Greco and many other famous artists.
At the end of the visit the driver will take you back to the port.

The Royal Palace is one of the four residences that the Bourbons, sovereigns of Naples for two centuries, used during the Kingdom of the Two Sicilies. Built in the seventeenth century, it underwent many alterations over time, also due to a fire following which the monumental staircase was built, the belvedere courtyard and the hanging garden. Today it houses the Museum of the historic apartment where you can see not only the royal residence but also the rich collection of works of art that were commissioned by the sovereigns in person.

The Museum of Capodimonte was founded as a hunting lodge of the Bourbons, Neapolitan sovereigns from the beginning of the seventeenth century. Soon it was decided to use the rooms of the building to welcome the works of the Farnese collection, inherited by Carlo di Borbone from the mother.
Inside it is possible to contemplate the works of art of famous artists all over the world, Italians and others. Among these it is enough to mention Tiziano, Caravaggio, El Grego, Brueghel the Elder, Parmigiano, Annibale Carracci.

A ship in a harbor is safe

“A ship in a harbor is safe, but it not what ships are built for.”
— John A. Shedd