Sorry. Nothing fits that criteria.

The most important painting gallery in all of Southern Italy 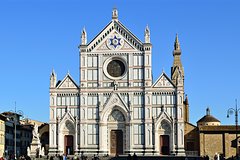 Private Guided Tour of Florence Basilicas and Their Cloisters
3h | from €16
Book it
The invaluable artistic treasures and beautiful Romanesque, Gothic and Renaissance architecture of the spectacular churches of Santa Croce, San Lorenzo and Santa Maria Novella and the charm of the ancient cloisters, evocative oases of peace and greenery in the heart of the city.

Your tour begins at the Basilica di Santa Croce, a masterpiece of Gothic architecture with a facade clad in polychrome marble. This is the ancient church in which the Franciscan friars chose to set up and begin treating pelts and leather and meditate in peace in a place that was, at that time, located outside the city walls. We will admire, from close up, the beautiful frescoes by Giotto and Agnolo Gaddi, the Crucifix and Annunciation by Donatello and the world-famous funerary monuments and tombs of illustrious figures from the past such as Michelangelo, Galileo and Machiavelli. Next, we will enter the elegant Brunelleschi Cloister bordered by columns carved from pure stone, and then pass into the fourteenth-century Ancient Cloister at the end of which lies the beautiful Pazzi Chapel, a sublime example of Renaissance harmony, also the work of Brunelleschi.

Leaving the Franciscan Basilica, we will make our way through the picturesque medieval streets, passing along Via Torta (Curved Street), whose unusual curvature traces the outline of the Ancient Roman amphitheatre, built here in the second century AD. Soon we will arrive at the famous Piazza della Signoria, a concentration of architectural and sculptural masterpieces which has no equal in the world. Here begins the fascinating story of the powerful Medici family whose history was tied to that of the city for more than three centuries.

You will then pass into the Piazza del Duomo, the city's religious centre, where you will be able admire the Cathedral with its famous Dome, the Baptistery and Giotto's Campanile (bell tower).

In the heart of the lively Medici quarter, bordering the Piazza del Duomo, you will find yourselves in front of the Basilica di San Lorenzo, Florence's the oldest church, consecrated in 393 by Sant'Ambrogio, rebuilt in the year 1000 and enlarged in 1400 by Brunelleschi at the behest of the Medici family who chose it as their parish church. Inside the Basilica is the Old Sacristyby Brunelleschi with the tombs of the founders of the Medici family and works by Donatello, Bronzino, Filippo Lippi, Rosso Fiorentino and Pontormo, to name but a few. Leaving the church, you will enter in the impressive Cloister of the Canons at the centre of which stands an imposing 16th-century orange tree which was dear to the Medici family and became a kind of symbol of their dynasty.

Finally, you will head towards the striking square where the Basilica di Santa Maria Novella stands with its splendid Renaissance façade by Leon Battista Alberti covered with white and green marble. Inside the Basilica, founded by the Dominican Fathers at the beginning of 1200, you will have the chance to see masterpieces such as the "Crucifix" by Giotto the "Trinity" by Masaccio and the spectacular frescoes by Filippino Lippi and Ghirlandaio and also hear the story of the "mendicant order" of friars who have always been present in this church. Your tour ends inside the elegant "Green Cloister" so named for its beautiful murals in green earth by Paolo Uccello.

“Man cannot discover new oceans unless he has the courage to lose sight of the shore.”
— Andre Gide