In Rome
In Italy

more
Museum
In Rome
In Italy

Explore the eternal citys most iconic monuments, squares, fountains and movie locations on an afternoon walking tour that will evoke the spirit of Fellinis ultra glamourous masterpiece. Taste typical Italian espresso at a local coffee roasters, learn about local Roman wine and cheese and taste the best gelato in town as you get the inside scoop on the many historic and gastronomic highlights of Italys enchanting capital city.

Your dolce vita adventure begins where the famous film was written by Italys greatest film director, Federico Fellini. Enjoy a stroll down the Via Margutta, a street famous for inspiring painters, sculptors, artisans, poets and musicians and learn about the artists that have lived here throguh the centuries.
Ready for an injection of movie glamour yet? Well pass by the home of Fellini where he lived with his actress wife Giulietta Masina and as we do well talk a little of about his life and career. Staying with the Hollywood theme, well then check out the house that stood in as Gregory Pecks home in the iconic Audrey Hepburn movie Roman Holiday. Fun fact: this is the first Hollywood film to be entirely filmed on location in Rome. Nearby, well stumble across the apartment where Pablo Picasso lived, over 100 years ago.

An espresso stop at a local caffe that was once the private art studio of Antonio Canova , a well-known and respected sculpture artist of the 19th century, is up next.  Admire the elaborate marble sculpture as you enjoy a true Roman Espresso (your guide will teach you how to order it, the Roman way) and listen to your guide talk about Italian coffee culture and the many local roasters that have sprung up around the city centre.

Our next stop is the Monumental Staircase. A total of 135 steps lead to the Trinita del Monti church that overlooks the Spanish Steps and the Barcaccia Fountain by Bernini. As we wind our way through the atmospheric Roman streets, heading towards the Trevi fountain, well stumble across one of our favourite wine bars, where we will stop to taste local wine from the foothills of Rome, accompanied by local salumi, cheese (including Pecorino Romano) and delicious focaccia bread.

It couldnt be a dolce vita themed tour without a visit to the world-famous Trevi Fountain, which has become the stuff of legend since Anita Ekbergs midnight frolic caused an international sensation in the 1960 movie thats given our tour its title.

Next up, well pass through a shopping gallery dedicated to Roman legend and comedy actor, Alberto Sordi only to arrive at the Pantheon, one of the worlds greatest and best preserved Roman temples. In the 7th century AD it was transformed into a church and remains one of the most astonishing sights in Rome; guarenteed take your breath away. Dont forget to admire the beautiful fountain outside too, crafted by Giacomo della Porta.

Your taste of the Roman good life will end at the Piazza Navona, site of the spectacular Four Rivers fountain by Bernini. Before you go, dont forget to ask your expert local guide for more tips on what else to see, do and eat during your stay in ravishing Rome.

Special Offer - Book by April 30th and travel by October 29th and save 20% off our previously offered price! - Book Now! 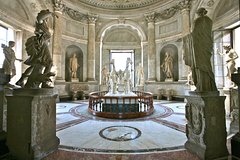 Skip-the-Line Semi-Private Tour: Vatican Museum, Sistine Chapel & St Peters
3h | from €100
Book it
Prepare to walk beneath the worlds most famous ceiling on this 3 hour private tour of the Vatican Museums. Your engaging guide will take your on a tour through some of the 54 galleries to learn about the most important works in this museum, including a visit to St. Peters Basilica, all while skipping the lengthy lines.

Over half a millennium old, the Vatican Museums include a vast collection of sculptures, paintings, and historical objects accumulated by popes over the centuries. Wander its galleries to discover everything form Etruscan archaeological finds to Picasso paintings. Youll likely learn about major works including Raphaels Transfiguration and the Laocoön Sculpture. The real showstopper, however, is Michelangelos world-famous painting on the ceiling of the Sistine Chapel. Your knowledgeable guide will share the secrets behind this iconic artwork.
Youll also wander into St. Peters Basilica, the worlds largest church where the Pope himself celebrates mass. Its one of the most important places on Earth for Catholics, but religious or not, youll be awestruck.

I travel not to go anywhere

"I travel not to go anywhere, but to go. I travel for travel’s sake. The great affair is to move.”
— Robert Louis Stevenson