Rome's Borghese Gallery is packed with amazing works by Bernini, Caravaggio, and Raphael, and ranks as one of my top three small museums in the world 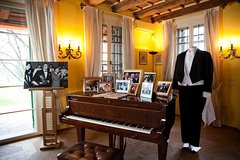 Day trip to Pavarotti's House Museum and Modena Tour from Rome
14h | from €250
Book it
Discover the life of a myth: the peerless artist Luciano Pavarotti. Explore the little town of Modena during an unforgettable and comfortable daytrip by high-speed train from Rome to Modena too.

The residence of Master Pavarotti was finished in 2005; It is located in the area that he had acquired in the mid-eighties. In that same area Pavarotti has dedicated himself to his passion for horses, building and opening a riding school.
The villa has been designed following the instructions and drawings that the tenor gave to the architects and engineers who have supervised the construction. Many artifacts have been made by blacksmiths, carpenters, carvers, decorators from all over Italy who have created unique products. Even today his home reflected in every detail the personality of the one who conceived it. The house keeps personal items that he loved and contains the memories of his days spent in the company of family, friends and young students. The visit to this house will will enable visitors to experience Pavarotti in the light of its most intimate and warm rooms, to approach gently to his memory knowing his daily habits, finding the man he was once behind the scenes. You will especially enjoy the costumes so dear to him, pictures and videos that have marked his great artistic career, the countless awards and awards in a career of over forty years in opera houses around the world.
After the house you will visit Modena, its Traditional Balsamic Vinegar production, Lambrusco, as well as the delights of the city of Modena itself and Maranello. 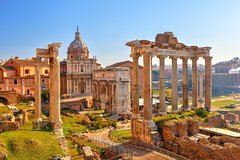 Private Tour: Imperial Rome Art History Walking Tour
3h | from €88
Book it
Explore Rome's Imperial Roman history in style on a private walking tour with an art expert. Accompanied by your own private guide who specializes in art history, you'll enjoy personalized attention on your special private tour of ancient Rome's historic highlights. You'll come away with a full understanding of ancient Rome, from its origins to the collapse of the Roman Empire.

Your private walking tour starts at the Arch of Constantine by the Colosseum. Before entering the famous amphitheater and Forum for a privately guided tour, you will take a closer look at the impressive arch dedicated to Emperor Constantine. Every roman general or emperor who rode in triumph through the Forum along the Via Sacra (the road you will walk along) had to pass under this arch.
Your personalized tour will visit the Colosseum in depth. After this visit you will enter to the Roman Forum where you will walk around the most famous monuments like Titu's Arch. Ascend to the Capitoline Hill where Diocletian built his fantastic Palace, Circus and now a beautiful small museum. Your expert art historian will bring it all back to life!
This in-depth private tour of Imperial Rome is hosted by a professional guide specializing in art history. Please list any special interests you have (art, architecture, history, culture) at the time of booking to alert your guide, so they can prepare for your private tour. 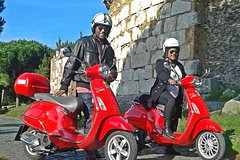 Appian Way Vespa Rome Tour
4h | from €170
Book it
Take a Vespa tour on the ancient Via Appia, the most famous of roads leading to Rome, that once connected the capital to the Port of Brindisi in southeastern Italy. You will be amazed by the amount of history that lies under and around the 2,000 year old cobblestone. The roads initial stretch is lined with the great monuments and ancient tombs of patrician Roman families. It was along the Appian Way that an escaping Peter encountered the vision of Christ. On this road Spartacus was crucified along with his army.
We will start the amazing trip visiting the door and the museum of Saint Sebastian, taking a stroll in the Scipion's park then we will pass through many catacombs as the famous saint sebastian, Then we continues to the antique tomb of Cecilia Metella and the villa of the Quintiles brothers, and finally we will reach the aqueduct park. We will make the experience of the roman landscape depicted from the artists of the past.

The Appian Way Vespa tour will start in front of the Colosseum. Start by getting adjusted to your Vespa by having a short ride to introduce you to how the scooter works. Then, head off toward the first and most important of all roads leading to Rome, the ancient Appian Way.
Ride the first 10-miles of the way, stopping by famous ancient Roman monuments, such as the Ancient Roman Tombs, early christian catacombs, the best preserved ancient Roman Circus (Maxentius), the great Roman aqueduct, mosaics from a first century Roman villa, famous churches like Domini Quo Vadis and St Sebastian outside the walls, ancient royal tombs and more.
Visiting the Appian way is a real treat as you will get a chance to go outside the city's center. You will be surprised to discover yourself immediately on a countryside with shepherds walking along with their sheep, plus a lot of greenery on your sides filled with monuments left from all periods of time.
During the tour your guide will ride a Vespa with you following on your scooter, enjoying a safe and beautiful ride. Stop from time to time when arriving at special sites, going down and exploring them. Your guide will make sure you get to see a lot of hidden gems and secret corners missed by most people when traveling along the way.
Highlights of the tour:
THE APPIAN WAY! and:
1. Colosseum
2. Circus Maximus
3. Porta St Sebastiano (Aurelian wall - Appian way entrance to Rome)
4. Church of Domini Quo Vadis (Christ foot-steps)
5. Church of St. Sebastiano outside the wall (pope's catacombs)
6. Circus of Maxentius - best preserved Roman chariot race stadium
7. Rome's aqueduct - Rome's engineering marvel!
8. Tomb of Caecilia Mattela
9. Capo di Bove Roma villa with well preserved mosaics and a small museum.
10. First mile stone of the Appian Way (Romans were the first ones to introduce mile stones)

Life is either a daring adventure

“Life is either a daring adventure or nothing at all.”
— Helen Keller